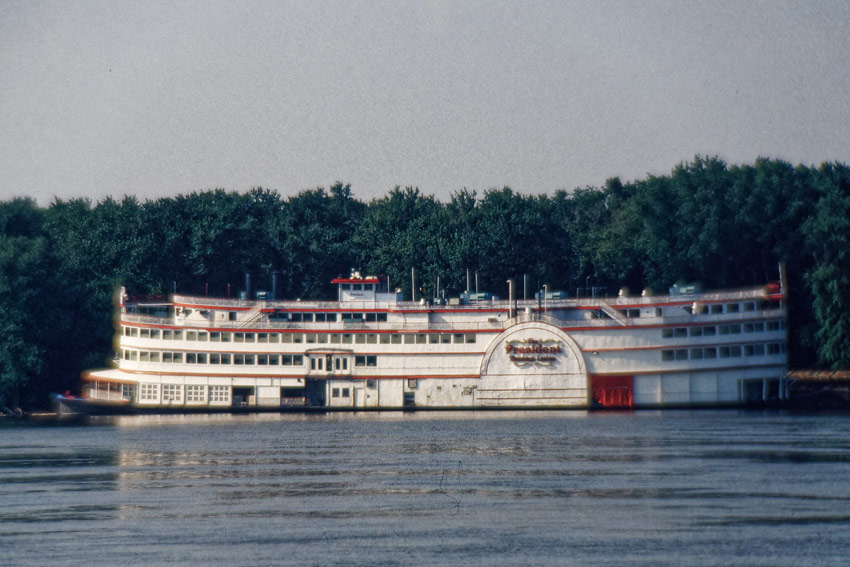 The hull of the sidewheeler President was originally built in 1924 for the steamer Cincinnati by the Midland Barge Co., Midland, PA. In 1933 the Cincinnati was sold to Streckfus Steamers Inc. of St. Louis, MO. The boat received a new superstructure and came out on July 4, 1934, as an excursion boat. She was 295.5 feet long and 84 feet wide and had space for 3,100 passengers. Her six boilers were oil burned. In 1944 her guards were glass-enclosed after the boat settled down as a full-time excursion boat in 1944. In 1978 her side-wheels were removed. She got three diesel powered propellers, one on each side and one at the stern. In 1981, she was sold to the New Orleans Steamboat Co. which is also running the Natchez. In 1985, she went to St. Louis, MO, and ran there as an excursion boat until 1990.

John Conally bought her and remodeled the President into a casino which opened in April 1991. She was used at Davenport during her last years. Her last cruise was on September 29th, 2000. She went out of service on April 14, 2001, loosing her certification by not being drydocked for inspection. She is now owned by the Isle of Capri Casinos Inc. She was moored opposite Montpellier, IA, on the Illinois side of the Mississippi River for some months in 2001. From November 23, 2001, until October 2003 the President was tied up in the Yazoo Diversion Canal at Vicksburg, MS. Now she is located at Treasure Island, McKellar Lake, near Memphis, Tennessee.

In September 2005, David Campbell and his family, from Effingham, IL, bought the boat. Their plans are to find a place on land, convert her to a hotel, and restore the President including her engines and paddlewheels. The map below marks the position of the remainings of the President according to Google Maps satellite pictures.

Whistle of the Str. President

Thanks to Judy Patsch, who made this recording in the 1970s, we can recall the sound of the Whistle of the once proud Streckfus Steamer “President” today.