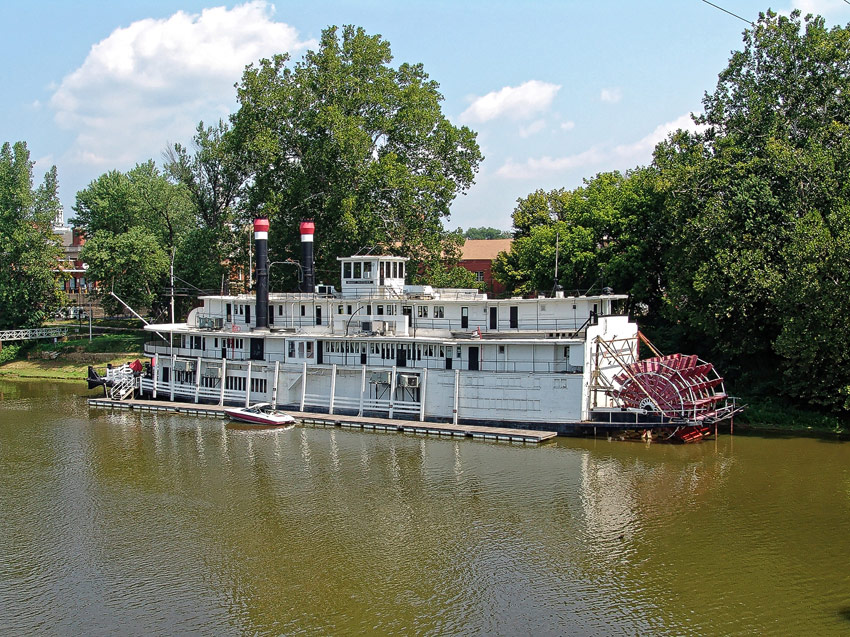 The Becky Thatcher was originally built as Mississippi (III), an inspection boat of the United States Army Corps of Engineers, in 1926. Her steel hull and machinery were new but the cabins came from her predecessor, the Mississippi (II). Although she was primarily a workboat she was outfitted with comfortable accommodations for 65 passengers. Because of her Texas deck she resembles more a packet boat than a workboat.

On April 19, 1961, she was retired and in 1963 sold to Mark Twain Enterprises of St. Louis, MO. In 1964 she was towed to Hannibal, MO, to serve as a restaurant and museum. In 1965 she was purchased by St. Louis Investment Co. and towed back to St. Louis. She was renamed to Becky Thatcher and extensivley restorated between June 1968 and February 1969. The boilers were removed and in 1973 also the engines which were sold to the New Orleans Steamboat Company. The Becky Thatcher broke her mooring lines in 1969 during a storm and was swept downstream. With 100 people aboard she passed two bridges but didn´t suffer any severe damages. The restaurant closed in 1974.

In 1975 the boat was purchased by a group of intersted citizens of Marietta, OH. They planned to bring her to Marietta as part of the Bicentennial project. Those citizens formed a not-for-profit corporation, the Ohio Showboat Drama Inc.. In September 1975 the Becky Thatcher was towed to Marietta, OH. In 1976 the production “Showboat” was performed by the Mid-Ohio Valley Players on the decks and an adjacent barge with 3,000 people watching from the shore.

In August 1977 the Becky Thatcher opened as a showboat after remodeling her first deck into a theatre. One month later the second and third deck opened as restaurant aera. The Becky Thatcher is moored near the W. P. Snyder Jr. on the Muskingum river.

The Becky Thatcher was entered into the National register of Historic Places by the National Park Service in October 1983.

In 1984 the boat sank during a spring flood with heavy damage to her hull and superstructure, but she was raised and returned after repairs for the 1985 season.

After having been out of service for a few years the Becky Thatcher has been sold and towed to a mooring near Pittsburgh, Pa., in October 2009. In February 2010 the Becky Thatcher sank at its mooring on Neville Island in the Ohio River, just north of Pittsburgh. She’s been considered a total loss.