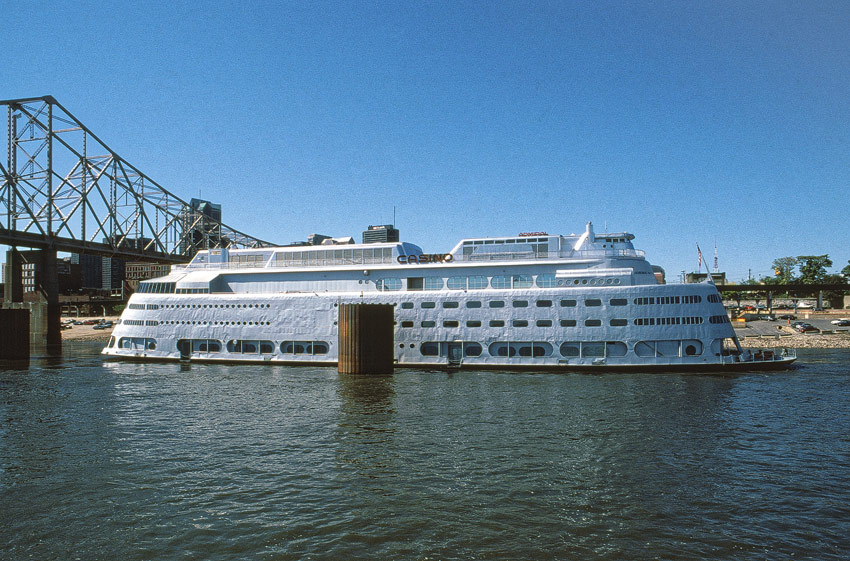 The Admiral was built at St. Louis by Streckfus Steamers Inc. in 1938 – 1940 as a sidewheel excursion boat. Her hull came from the former railroad transfer Albatross built in 1907. She is 374 feet long and 92 feet wide and had a capacity for 4,400 passengers. In the winter of 1973 – 1974 she was converted to diesel-props, one in each paddlebox.

The Admiral was and still is a unique boat because of her size and because of her art deco streamlining. She was the first steamboat on the Mississippi river which was fully air-conditioned.

She served as an excursion boat until 1979. She was sold several times and has been serving as a floating casino above Eads Bridge in St. Louis, MO. In 2011, the Admiral eventually went out of service and has been removed from the St. Louis riverfront on July 19, 2011, apparently to be towed to a scrap yard.

The Whistle of the Admiral

It’s the Admiral’s 4-chime whistle, followed by the powerful stack exhaust. Recordings are from 1969 at St. Louis.

Here is another recording of the Str. Admiral’s whistle, featuring the Streckfus Steamers’ landing signal:

Thanks to David Tschiggfrie for the recordings and to Stephen M. McMullen for sending to us.

Listen to several minutes of calliope music from the Str. Admiral in 1969. One section has been playd while the boat was in dock, and the other while coming back upstream. The climax of the calliope is the wonderful sounds you hear when it goes under the two bridges before laying up in port to disembark the passengers. The first bridge is the MacArthur Bridge; the second is the Poplar Street bridge.

This recording was taped live aboard the Streckfus Steamer Admiral on Sunday, August 24, 1969, at St. Louis, MO, by David Tschiggfrie. The calliopist was Dick Renna.

Thanks to David Tschiggfrie for the recordings and to Stephen M. McMullen for sending to us.