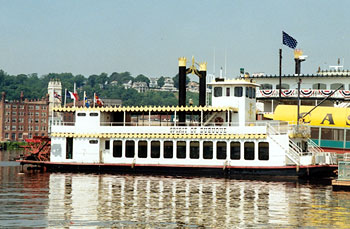 The Spirit of Dubuque is an authentic dual paddlewheeler designed by Robert Kehl and built in 1976-1977 by Scully Brothers Company of Morgan City, LA. The construction began on July 1, 1976. The boat was christened on May 14, 1977 by Iowa Gov. Robert Ray. She is powered by two Detroit diesel 6-71 engines (200 horsepower apiece). She has a capacity for 377 passengers and 4 crew members. The Spirit of Dubuque is 93 feet long and 28 feet wide. She has two decks, an air-conditioned dining deck and an open upper deck for sightseeing. The Spirit of Dubuque was originally owned by Bob and Ruth Kehl. In May 1994 she was purchased by Captain Walt and Nancy Webster. She has been offering Lunch, Dinner, theme and Murder Mystery cruises.