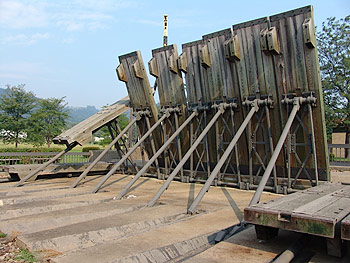 Before modern locks and dam with their lock chambers and lock gates were built, another construction fulfilled the purpose of regulating the river in a way that boats were able to navigate the rivers almost throughout the year, independently of the natural water level. Wicked Dams consisted of movable planks that were only raised when needed.

At high water levels when the dam was not needed, boats ran over the lowered dam. The dam was raised and lowered by steam-powered work boats as on exhibit at the Hannibal Locks and Dam on the Ohio River (see also MANEUVERBOAT 35).

There is an old wicket dam still operating on the Illinois River at LaGrange Lock & Dam as well as at the Creve Coeur Lock & Dam between Peoria and Pekin.

In 2010 Olmsted Locks and Dam will replace Locks and Dams 52 and 53, the last wooden wicket dams on the Ohio River, which were built in 1928-29. But Olmsted will again have a wicket dam, but with steel wickets, i.e. a 1,400-foot navigable pass section of steel wickets.

There is a good explanation on a web page featuring wicked locks and dams.

Below are two pictures of the locks and dam no. 52 on the Ohio River with the old wooden wickets raised to maintain pool level upriver the dam. Note the small Army Corps of Engineers work boat tied to the outer side of the lock wall. Pictures below are from 2005. 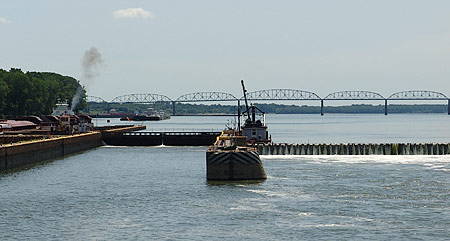 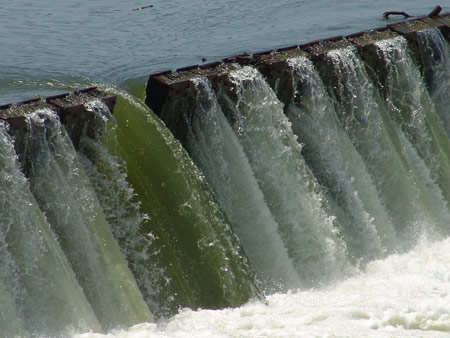