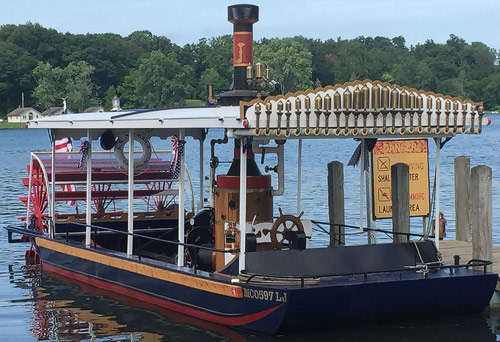 The S.S. Norman J has recently been fitted with a Bestek 25 note Calliope, an original design with “Made in the USA” Bronze Casted Bell whistles, that plays using the latest WiFi technology, or if anyone brave enough, can play using the onboard keyboard.

The boat’s owner, Kenneth Griffard (customcalliope.com), told us: “The SS Norman J was named after my father, Norman, who was the inspiration for me to restore this iconic steamboat and bring it to pristine condition for many generations. Always needing two people to manage the Boiler, Steering, and the occasional sightseeing, forward controls were added as well as wireless forward/reverse shift. Allowing time to play the calliope as well, all only needing one person to run safely. The SS norman J seating is an open design, with 15 passengers, only draws 10 inches. The Paddlewheel was increased to 16 paddles, that makes an efficient 10 knots at full speed.”

Here is another Youtube video showcasing the S.S. Norman J: