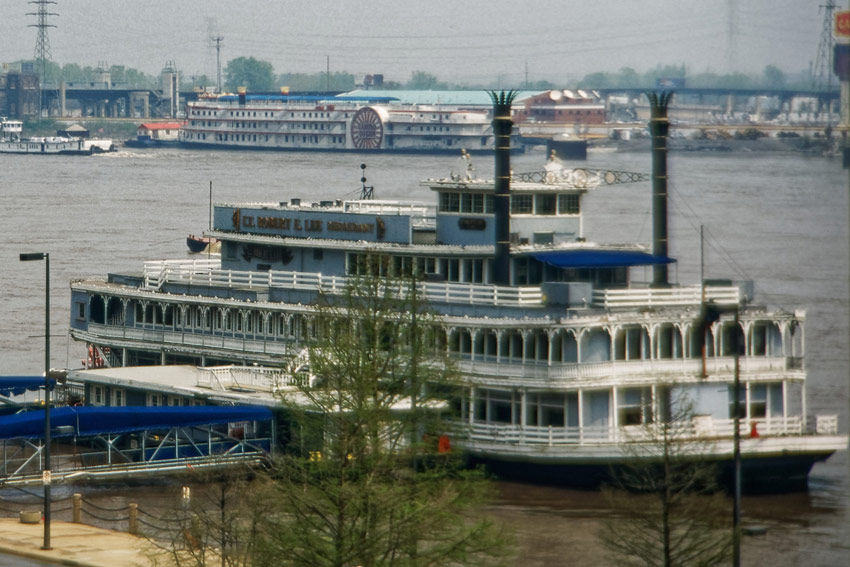 She came from Greenville to the St. Louis riverfront in February 1970 and opened as a restaurant two months later. Although she never has been a real boat she was Fred Leyhe’s dream of a perfect steamboat. Fred Leyhe was the son of Capt. Buck Leyhe one of the owners of the famous Eagle Packet Company, running famous steamboats like the Golden Eagle, the Cape Girardeau (sold to the Greene Line and renamed Gordon C. Greene), the Bald Eagle, the Spread Eagle, the Grey Eagle, the Alton, the Peoria and many others.

The Lt. Robert E. Lee named for the Confederate General who served as a young man in St. Louis with the Army Corps of Engineers (1837 to 1841) was built as a riverfront restaurant. After Fred Lyhe’s death she was sold to the President Casinos Inc. and severly damaged during the flood of 1993. In 1997 four local businessmen, Scott Hawkins, David Heyl, Bill Manley and Rick Yackey, bought and renovated her. Most of her wooden structure has been replaced by steel, and she got a new paddlewheel. She reopened as a restaurant called the Mesquite Charlie’s Steaks on the Lt. Robert E. Lee on October, 10 2001. The restaurant closed in January 2002, after the economic downturn after the September, 11 2001, attacks. In 2004, she was moved to Kimmswick, MO, where she operated as a floating restaurant for a while until being closed again. In 2008 the Lt. Robert E. Lee was auctioned and was supposed to start a new live at St. Charles, MO.