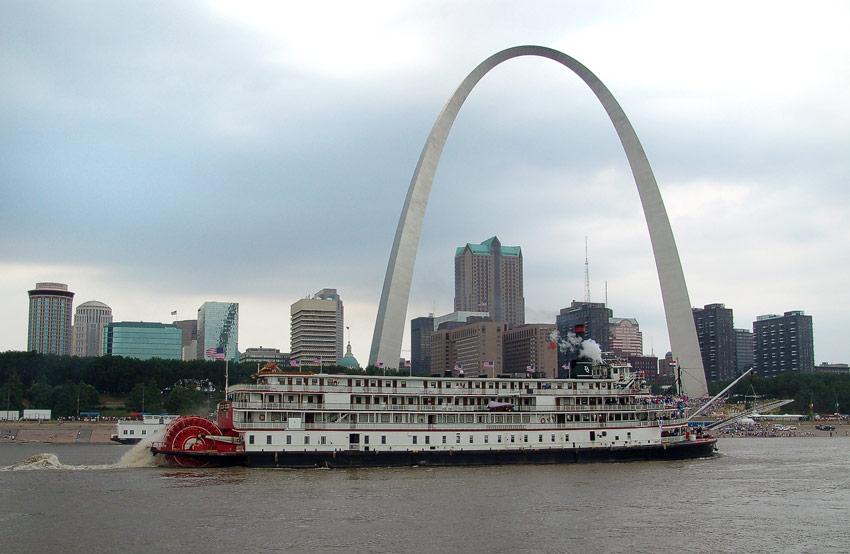 The Gateway Arch Riverboats is trading back to the Streckfus Steamers. They are operating two paddlewheel riverboats, the BECKY THATCHER and the TOM SAWYER. The one hour narrated sightseeing cruises give a good photo opportunity for the docked Queens, the Admiral and the Gateway Arch. Both boats a running special and charter cruises, too. Operating all year round.

The remains of the steamboat GORDON C. GREENE (#2387) can be found above Eads Bridge but are only visible in extreme low water level conditions. The GORDON C. GREENE was built in 1923 originally named CAPE GIRARDEAU (#0829) as the last steamboat by the Howard Shipyard in Jeffersonville, IN, for the Eagle Packet Company. In 1935 the boat was sold to the Greene Line Steamers of Cincinnati, OH, and renamed. Retired and sold in 1952 the boat was renamed SARAH LEE and became a floating hotel at Portsmouth, OH. The boat was again sold to Owensboro, KY, to become a floating restaurant and renamed RIVER QUEEN. Then she moved to Brandenton, FL, and appeared as a night club in New Orleans, LA, in 1960. She went to Hannibal, MO, again as a restaurant and was moved to St. Louis in 1964. On Dec 3, 1967, she sank.

We do have much more details, history and pictures of the Gordon C. Greene here.

The St. Louis Mercantile Library is a great source of history for researchers. Check the website for the numerous special collections.

The Herman T. Pott National Inland Waterways Library is a special part of the St. Louis Mercantile Library. It is focusing on the inland rivers and some coastal waters. It is holding about 15.000 volumes including the personal library of Ruth Ferris. Included are also several special collections like the Ruth Ferris Collection of Life and River Lore, the Jim Swift Collection, the Dorothy Heckmann Shrader Collection, the Waterways Journal Collection and more. Check website for details.