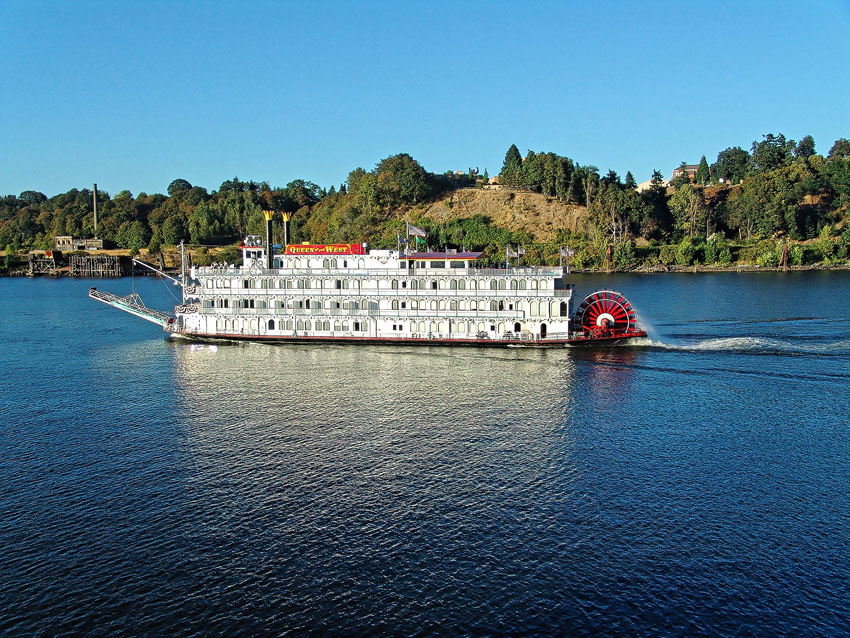 In 1995, the year of her launch, the QUEEN OF THE WEST reintroducing the tradition of sternwheelers to the Columbia, Willamette and Snake Rivers. At the time, the Queen of the West was the first paddle wheeler to sail the Columbia River in 85 years.

The QUEEN OF THE WEST is designed to hull dimensions and paddlewheel configuration of the sternwheeler Portland, which was built in 1947 at Nichols Marine Iron Works, Portland, Oregon. The steam whistles come from an unknown steamer of the 1800s. The helm wheel was the original early-1900s wheel from the Seattle fireboat Duwamish.

End of 2008 Majestic America Line quit business and has sold the Queen of the West to American Cruise Lines in 2009. ACL is upgrading and renovating the vessel and will resume operating her as a river cruise ship on the Columbia and Snake Rivers in August 2010.

I made these pictures from aboard the Columbia Queen on a cruise in 2005 on a cruise on the Columbia, Willamette and Snake Rivers. She passed us just when we were heading for Portland, OR, on our final day of the cruise. How beautiful the Queen of the West looked in that bright, clear morning sun on the Columbia River.