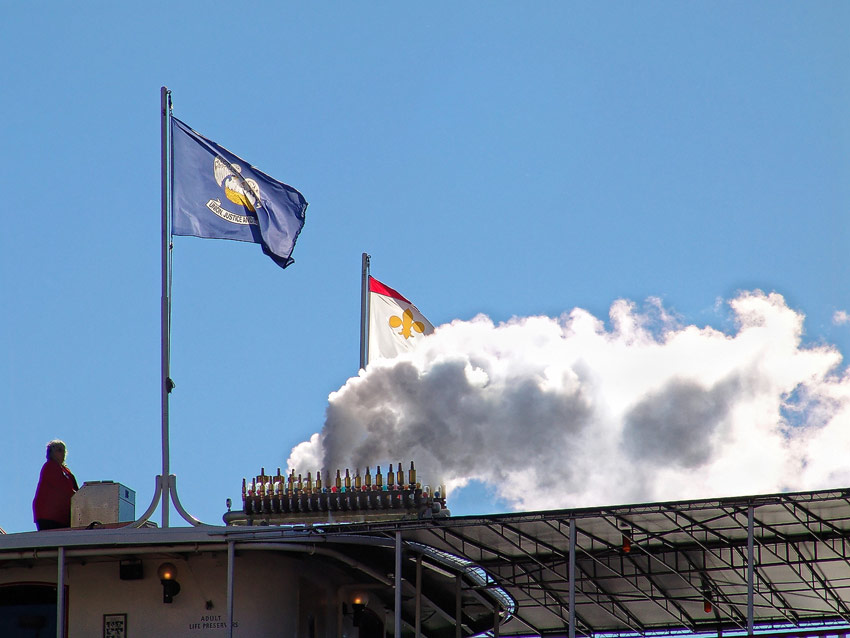 Who ever has heard a steam calliope wonders how the calliope got her name, taken from the muse for beautiful sound from the Greek mythology. it’s loud, but certainly not exactly beautiful, except for people who just love this instrument. The Calliope is pronounced “kally-ope” by circus people, but on the river it’s usually pronounced “kal-eye-o-pee”.

Patented in October 1855, its inventor, Joshua C. Stoddard, intended to use this instrument in a church. Soon the calliope found its way to the circus and especially to the floating showboats on the Lower Mississippi River. The FLOATING PALACE sailed by the Spaulding & Rogers North American Circus introduced the first calliope on a show boat. It did not only attract the audience but also outperformed the bands of competing boats simply by being much louder. After Civil War the showboat NEW SENSATION reintroduced the calliope again, in 1877.

The EXCELSIOR, in the St. Louis – St. Paul trade on the Mississippi River, was the first western steamboat to have a calliope. Other sources claim that the UNION got the first steam piano in 1858.

The DELTA QUEEN in 1960 received the first calliope with a remote keyboard located a safe distance from the whistles. It was installed by the famous Commodore E. J. Quimby, who found an instrument salvaged from the showboat WATER QUEEN for this purpose.

Many of the calliopes you still find today on several boats were built by Thomas J. Nichol of Cincinnati, Ohio in the late 19th and early 20th century. The DELTA QUEEN’s calliope is one of them, the President carries at least some remainings of another of these great calliopes. Details about the history of this calliope, see “The History of the Delta Queen Calliope“.

Steamboats did not always have steam whistles. Before that, bells had been used for passing signals and other communication between boats. According to Way’s Packet Directory, the 1844-built REVENUE had the first steam whistle installed on a steamboat. Other sources are mentioning the MINGO CHIEF in the same year. Today whistle signals are still accepted as official passing signals on the rivers, but radio has replaced their function as required method of communication between boats.

The sound of whistles is varying tremendously. There are high tone, single note sounds, deep, sonorous 3-chimes, combinations of usually three single-tone whistles and much more different variants of steam whistles. Some examples are ready to listen at the whistleblow recordings.

We have lots of sound recordings of stem whistles included in the stories about various steamboats and riverboats. Here are the links:

There is also a huge collection of historic steam whistle recordings from various steamboats and towboats. Thanks to an old LP recorded in 1965, steamboats.org can provide the sound of some famous steamboat whistles on our “Steam Whistle Blow” page.

There are also quite a few recordings and even video clips of air and stem calliopes playing. Here are the links (which are partially the same as for the steam whistles):

And then, there is (or was?) a calliope mounted to the barge ANNA MARIE we enjoyed listening to during Tall Stacks 2006. The calliope was build by Dave Morecraft in 1988.

Historical Facts about the Calliope

Travis C. Vasconcelos has provides some profound information about the history if calliopes on the Stemboats.org Message board in May 2002 which we’ve put together here:

Travis says: To my knowledge the first Inland Rivers steamboat fitted with a calliope was the Packet/Str. Unicorn, at Cincinnati, OH. This was in 1860. The instrument was a Joshua Stoddard “American Steam Piano”. It had both manual (keyboard) action and a spoked cylinder that when cranked, played a simple tune.

This comes from Steven Espensheid’s book, the “The History of the Great American Steam Piano”. I doubt this was the “first” application on a riverboat. However, it is the first confirmation I have seen in print.

Many stories are floating around about calliope use on steam trains. Although, I have seen one newspaper account of this, that single press mention is the only I have seen.

The calliope did not make appearance in the circus until the 1870’s, well after the Civil War.

There are stories also told of calliope whistles being used as mortar shell casings in the Civil War. I do not doubt this, as any steam whistle bell is perfectly suited for such use. As a mater of fact, the whistles Earnest J. Wilde made for the calliopes he built for the Johnson Party Barge (aka: BB Funliner and City of Memphis)and the Str. Belle of Louisville were built of spent mortar casings from WWII. So that story has come full circle!

However, the spent mortar shells did not hold up very well and only one of the Earnest J. Wilde instruments survives to this day. The Late Mr. Wilde’s personal instrument, today is the property of Capt. Hal Wilmunder, owner of the Str. Elizabeth Louise in Sacramento, CA. It is on a Circus Wagon of sorts and is used at steam shows in the area.

The first calliope placed on a river steamboat I can confirm is the Str. Unicorn, in 1860.