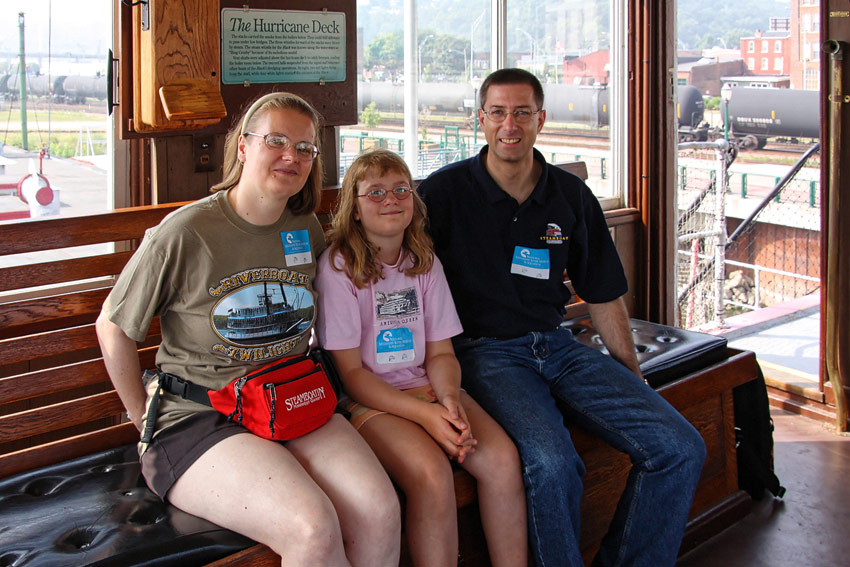 This is the Steamboats.org family: Carmen Winkler, Franz Neumeier and our daughter Leonie (born in 2000). We live in Munich, Germany, but do have a deep and close connection to the steamboater’s community along the „Western Rivers“.

Heavily bitten by the steamboat bug on their first cruise on the Delta Queen from Pittsburgh to Cincinnati in 1995, Franz and Carmen started the website Steamboats.org in 1997, providing paddle-wheel steamboat information on the Internet, when back then it still was in its early stages.

Mostly between 2001 and 2009, Carmen, little Leonie and Franz have been cruising all navigable waters in US inland rivers, from New Orleans to St. Paul and Pittsburgh. This includes the Columbia, Willamette and Snake Rivers on the Columbia Queen and an Alaska Inside Passage cruise on the Empress of the North (today’s American Empress). In more recent years, in 2013, Carmen and Franz have experienced ACLs Queen of the Mississippi (which now is the American Pride on the Columbia River). In total this makes about 15 paddle-wheel riverboat cruises, mostly on the Delta Queen, Mississippi Queen and American Queen.

Steamboats.org grew quickly when incorporating a message board in November 2001 when the Delta Queen Steamboat Company ran into deep financial trouble with a totally unclear future. The first message on the board in November 2001 said: „Welcome to this forum, which is a place to share information, hopes and concern about the future of the wonderful boats of the Delta Queen Steamboat Co. and the future of the employees of the boats that also had become friends to many of us.“

And that’s exactly what happened. That’s how a wonderful community of steamboat fans rapidly started to build up on the Internet while it has been existing in „real life“ a long time before, of course, and still does.

Carmen and Franz also have been heavily involved in the „Save the Delta Queen“ campaign, partially coordinating, since 2007 for many years.

In 2009, Franz stopped working as editor-in-chief for several computer magazines (which included the German edition of “PC Magazine”) and started his own business as freelance travel writer and photographer specialized on cruise ships and cruise destinations and started his very successful cruise blog Cruisetricks.de (written in German). Today he is a renowned expert for cruise travel, travelling the whole world on cruise ships. As Carmen travels a lot with Franz as well, she also writes her own cruise blog, Cruisediary.de.

As Franz’ new business is mostly focusing on ocean-going cruise ships, it does leave less room for steamboat travel. Franz, Carmen and Leonie still are well-connected in the steamboaters community and keep in contact with many friends all along the rivers. While the Delta Queen is still our first love, many others like the Belle of Louisville, the Natchez, the Julia Belle Swain are in our hearts as well.

We believe that travelling on a paddle-wheel steamboat is by far the most beautiful and relaxing way of travel.

Here are some more recent pictures of the Steamboats.org Family from their travels around the world as well as visiting the Delta Queen in 2013 …