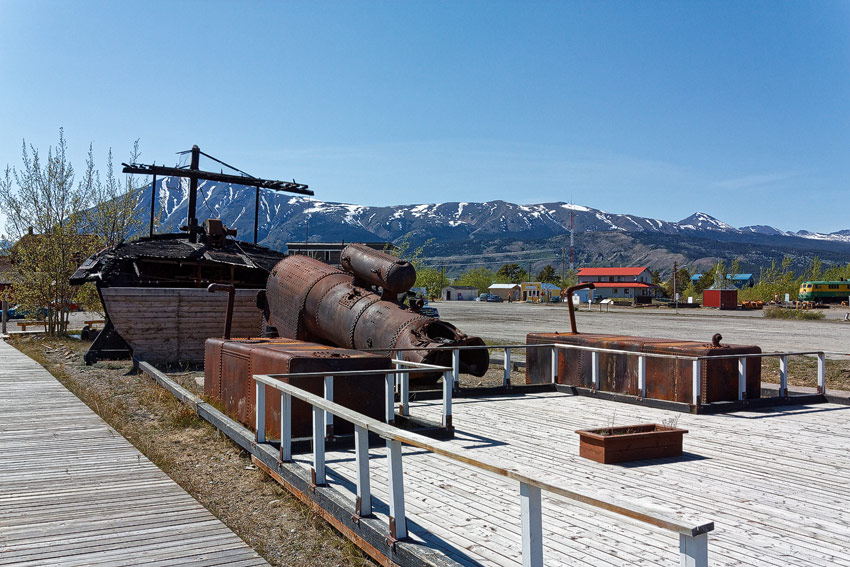 Starting as early as 1901 – when the Whitepass and Yukon Railroad from Skagway to Whitehorse was completed – Carcross operated as the transfer point to the Southern Lakes excursion steamboats like the S.S. Tutshi for Alaska cruise ship passengers.

Even in the early 1900s Alaska was already a popular tourist region and thousands of tourists enjoyed steamboat cruises on the Southern Lakes from Carcross every year. Excursions were usually offered from Carcross to Ben-My-Chree (Tagish Lake) and Atlin (Atlin Lake).

For a short period of time Carcross bloomed as gold was discovered at the Klondike and at several spots even close to Carcross starting in 1897. The place then was still called Caribou Crossing. “Carcross” became the official name in 1904. Today’s population of Carcross is just above 400.

Though Carcross is a very small town, it holds a wonderful piece of steamboat history, the remainings of the steamer S.S. Tutshi (pronounce: too-shy).

Explorenorth.com has written a good piece about the history of Carcross and also some historic photos, including pictures from the steamboat Tutshi.

The Tutshi was launched in June 1917 by the British Yukon Navigation Company. The boat was 167 ft. long and held 110 passengers. Over the time more staterooms had been added on the texas deck to accomodate more passengers.

Built especially for the tourist business on the Southern Lakes (lakes right next to Carcross: Tagish Lake and Atlin Lake) she had a keel instead of a flat bottom like the riverboats on the Yukon River.

The Tutshi mainly served as a pleasure boat for cruise ship passengers arriving at Skagway, AK, and being transferred to Carcross by railroad. But occasionally she also carried mail and freight.

In 1925 the Tutshi, originally build to be fired by wood, was converted, so she could now burn oil as well.

In 1955 the career of the S.S. Tutshi ended and she was hauled out of the water. 1972 the steamer was acquired by the Yukon government and restored. In 1990 a fire destroyed most of the Tutshi. Today, the remainings of this tragic fire are on display at Carcross, Y.T. right next to the Whitepass and Yukon Railroad station. The exhibit features most of the machinery, especially the two steam engines, boiler, metal parts of the paddlewheel and the front part of the hull (see picture).

For more pictures, see our SS Tutshi picture gallery which also includes pictures of the SS Tutshi before she burned down from Frank Prudent (thanks very much!) who was lucky enough to visit Carcross prior to 1990.