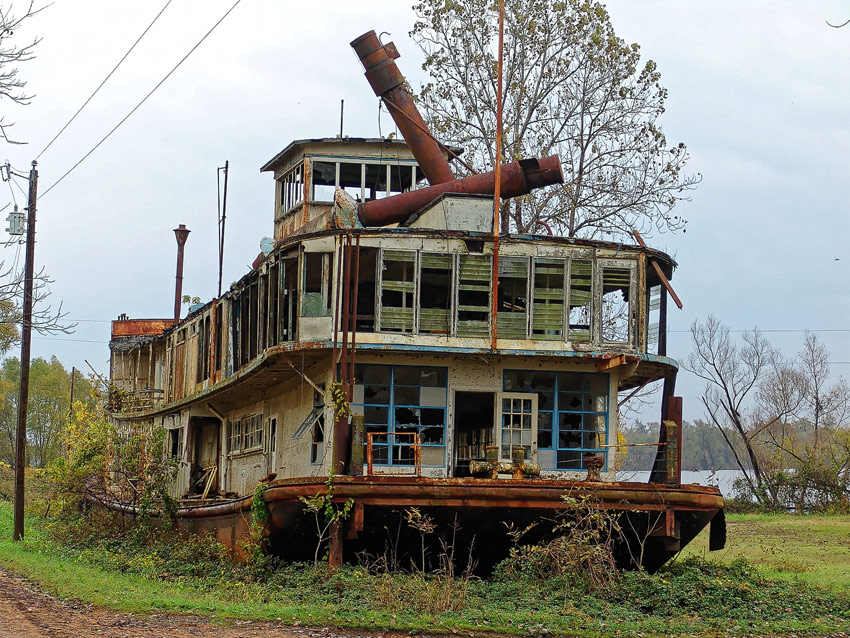 The Mamie S. Barrett was built as towboat in 1921 by the Howard Shipyard of Jeffersonville, IN, for the Barrett Line (Oscar F. Barrett) of Cincinnati. She was 146 feet long and 30 feet wide.

She was sold to the U.S. Army Corps of Enigneers in October 1923 and sent to Florence, AL. She appeared in the Rock Island District inventory in 1926. In 1935 she was renamed Penniman by the U.S. Army Corps of Engineer who used her as inspection boat. After retirement of the U.S. Army Corps of Engineer in 1947 she was sold to Vollmer Brothers Construction Co. Sold again in 1949 To Spencer Merrills she became a clubhouse and restaurant for the Harbor Point Yacht Club at Weston Alton, MO. She was renamed Piasa. In 1981 the boat was sold to Dick and Kathy Oberle who moved her to Eddyville, KY. She was given back her original name, underwent an extensive restauration and served as a restaurant at the marina on the Cumberland River / Kentucky Lake. In 1987 the boat was purchased by John and Mary Houseman and brought to Vicksburg on November 5 of that year. She was converted to a showboat with a 120 seat theater on the main deck and a restaurant on the second deck. The boat was placed on the National Register of Historic Places. Around 1990 the boat was purchased as casino boat but never used. During the flood of 1993 the Mamie S. Barrett found herself beached in a cut-off below Natchez. In 1995, she was moved to Vidalia, LA. The flood of 1997 prooved that she still floated. In 1999 the boat was donated to the town of Rosedale, MI. But the town of Rosedale has no use for the vessel.

The Mamie S. Barrett now is located at Deer Park, LA, 10 miles away from the Mississippi River. In July 2001 the city of Jeffersonville, IN, showed an interest in the Mamie S. Barrett, but the project never materialized. Also, the Howard Steamboat Museum of Jeffersonville, IN, is interested in the boat. The museum already tried to acquire the vessel in 1994. There are plans to save the boat for the museum, at least her pilothouse.

In 2017 the Mamie S. Barrett caught fire and was completely destroyed after the Mississippi River rose into the area where it was sitting.