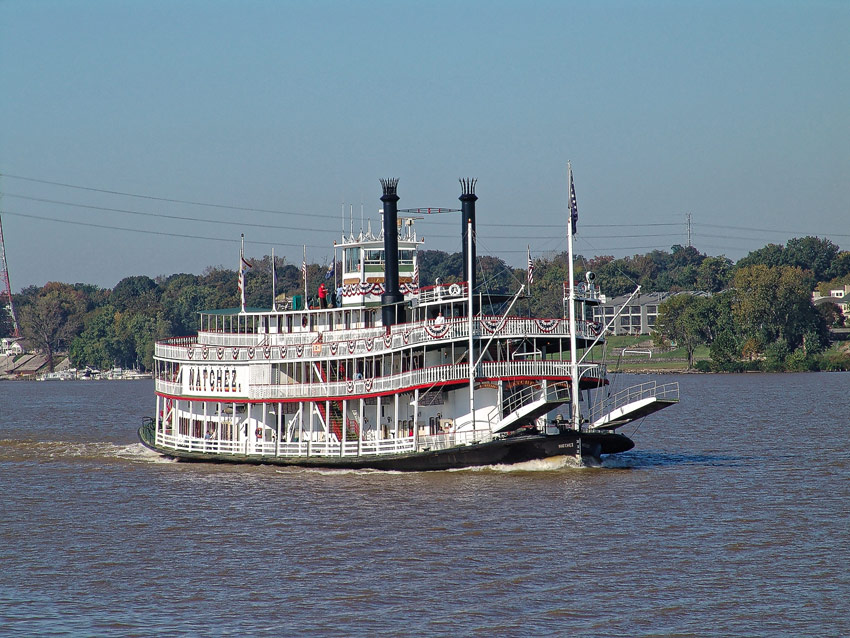 The steamer NATCHEZ (#4113) is offering cruises through the New Orleans harbor, Dinner Jazz cruises and special event cruises. On the ride downriver you will be pointed out to the steamboat houses which were built by a steamboat captain as a mixture of a Japanese tea house and a steamboat pilot house. The Natchez is celebrating its 40th anniversary in 2015.

Best photo opportunities are along the levee at Algiers, at Woldenberg Riverfront Park, using the Chalmette ferry at noon or 3 pm and the Canal St./Algiers ferry at 1 pm or 4 pm. Operates all year round, short lay-up usually in January.

The CREOLE QUEEN is making cruises to the Chalmette Battlefield and Dinner Jazz cruises. You meet the CREOLE QUEEN when you ride the NATCHEZ (#4113) on a harbor cruise. Operates all year round, seasonal schedule November-February.

The former Jumer’s Casino Rock Island is now located at New Orleans where it serves as excursion boat “City of New Orleans”, beginning in October 2018, along with the Str. Natchez.

As “Jumer´s Casino Rock Island” it has been one of the few casino boats really worth seeing – a beautiful replica of a paddlewheel riverboat and the towboat EFFIE AFTON (built in 1944 as twin prop steam towboat MATEUR #T1766).

At Rock Island she has served as a restaurant. It has been at Rock Island for a long time but in April 2009 it was moved somewhere up the Illinois River, sitting there for years waiting for a buyer.

The Louisiana History Galleries are showing the history of Louisiana in ten galleries. The River Gallery includes a table and three chairs of the steamer J.M. WHITE (#2866) and several paintings. If you have plenty of time, don’t forget to visit the Williams Research Center and search for river related documents.

Captain LaVerrier Cooley (+ 1931) choose the bell of his best loved boat, the steamer AMERICA (#0240), as decoration for his tombstone.

Exit City Park at I-10 west, the grave is close to the Fountain Gate Main Entrance, take Avenue H to the right, row 146 on the right (3rd row), walk up to I-10, it´s nearly the last one on the left in this row.

Close to the cemetery administration there´s the Barelli monument. On November 15, 1849, the steamer LOUISIANA (#3592) blew up and sank with 86 people lost. One was the son of Joseph Barelli who ordered this monument in 1856. The monument shows 5 angles above a relief showing the explosion.

Not a secure neighborhood, take a guided cemetery tour.