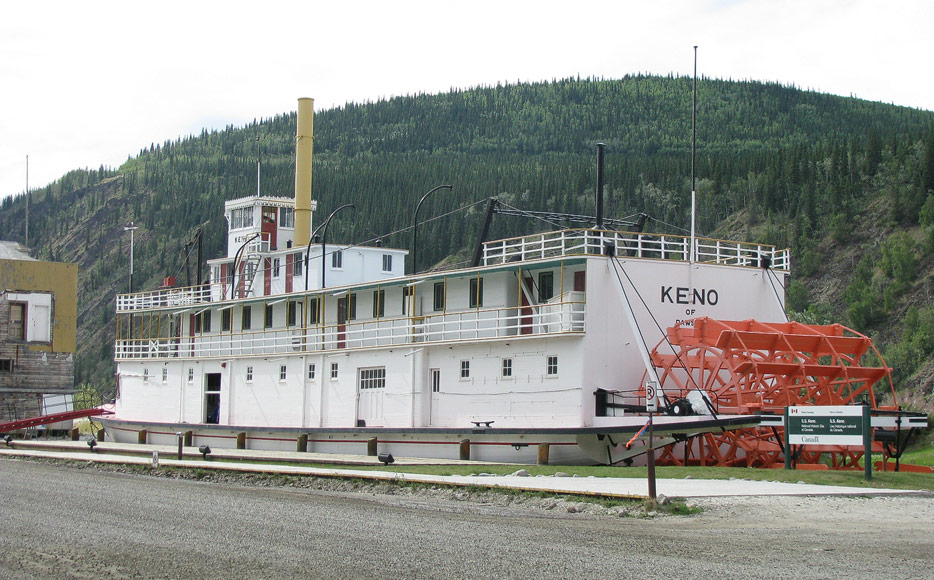 Dawson City has a strong background in steamboat history. Having emerged from a swamp at the confluence of the Yukon and Klondike Rivers when gold was found there in 1896. But even after the gold rush, river traffic was lively and paddlewheel steamers had been the only comfortable way of travel until the early 1940 when eventually the Alaska Highway was built.

Dawson City’s heydays are long gone, but still today gold prospectors are lucky now and then in this area. Dawson’s population is just about 1,300 but tourism is strong. By the way, to offial name of the city is just “Dawson”, but tourists and travel guides usually refert to the city as “Dawson City”.

Dawson was founded in 1897 as a result of the Klondike Gold Rush which started in 1896. At that time Dawson at some points had a population of over 40,000, dropping to under 5,000 after 1899 when the gold rush was over. Dawson has also been the capital of Yukon Territory until 1952.

The towboat S.S. KENO, which transported lead, zinc and silver ore between Stewart City and Mayo Landing in the 1920s, has been preserved and is now part of a museum exhibit about the mining history of the Yukon Territory.

None of the original steamboats from the gold rush era have survived. But the S.S. Keno comes at least close, having been built at Whitehorse in 1922 the S.S. Keno represents a typical vessel from her time and is one of the few remaining historic paddlewheel steamboats in the US. The Keno was moved to her present berth on the Dawson City’s waterfront in 1960.

Clearly, at that time the era of steamboats had found an end. The S.S. Keno was the last steamboat on the river and when moved downstream to Dawson in 1960, the crew even had to dismantle the top deck of the steamer to clear the Alaska Highway bridge. The Road has replaced the river in means of transportation, trucks had replaced the riverboats, very obviously.