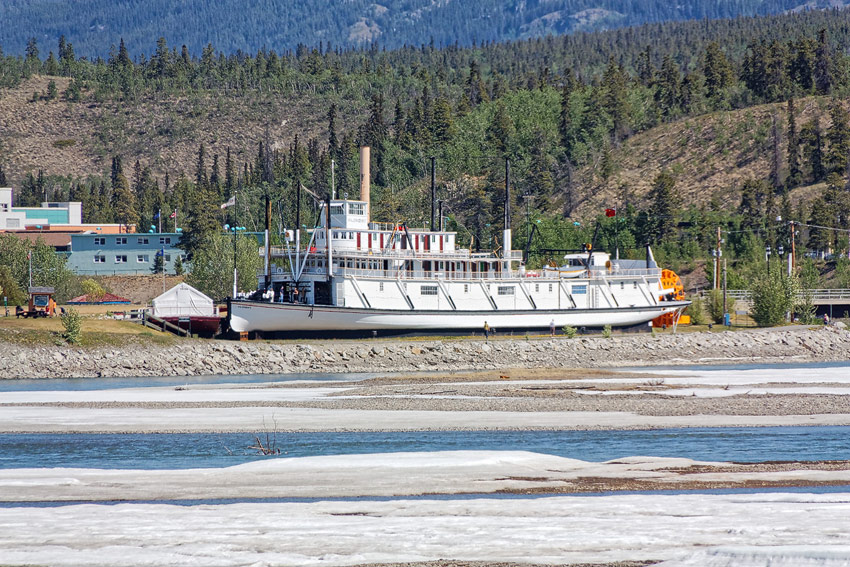 Whitehorse is the capital of Canada’s Yukon Territory, named for the White Horse Rapids of the Yukon River which today are long gone as result of building a hydroelectric power plant in 1958.

The city of Whitehorse was an important river port in the Klondike gold rush in 1896 and the following years, connecting the seaport Skagway, Alaska, and the northern territories of the Yukon Territory and especially Dawson City. Since 1900 the White Pass & Yukon Railroad connected Skagway and Whitehore, but before that the gold prospectors were simply walking across the White Pass or Chilkoot, carrying tons of supply by foot or with horses and mules.

Beautifully restored, the historic S.S. Klondike is a must-visit attraction at Whitehorse. Launched in May 1937 the sternwheel steamboat S.S. Klondike II plied the route between Whitehorse and Dawson on the Yukon River. She transported general merchandise, local products such as silver-lead ore and gold ingots, as well as passengers to and from Whitehorse and Dawson City until the opening of an all weather road between Whitehorse and Mayo in 1950. The Klondike is now the center piece of a museum. There you can tour the whole boat, including the freight deck and engine room as well as the passengers areas like the dining room.

The S.S. Klondike is designated as a National Historic Site of Canada. The steamer is 210 ft. long and was registered for a freight capacity of about 300 tons. In 1940, she had a crew of 40 and stateroom capacity for 75 passengers. Her main cargo was silver-lead ore from Dawson to Whitehorse while downstream food and fuel was the need of the settlers and gold prospectors at Dawson. Due to the strong current of the Yukon River, the upstream trip took 4 to 5 days while the trip back only took one and a half days. (photo: Helga Krueger, http.net)