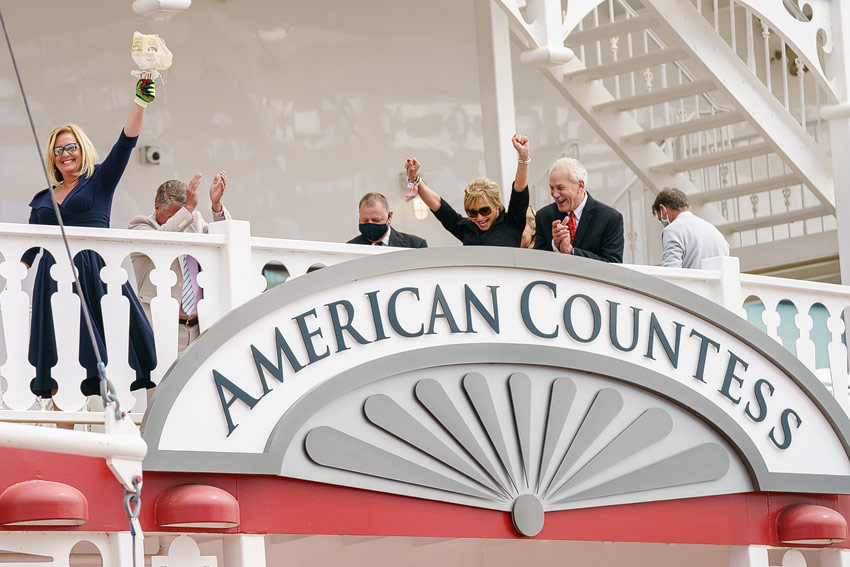 American Queen Steamboat Company resumed its operations with newly enacted health and safety protocols which include, but are not limited to, mask mandates in all public areas where social distancing is not possible, 100% testing of all guests and crew and mandatory COVID-19 vaccination for all guests and crew that will go into effect for all sailings beginning July 1, 2021.

“As we celebrate the grand debut of the American Countess, I could not be more appreciative of the incredible team that made it possible,” shares John Waggoner, founder and CEO of American Queen Steamboat Company. “We listened to our returning guests’ feedback on what they would like to see in a new riverboat and created a contemporary American masterpiece that guests are eager to experience.”

In her debut following the christening, American Queen Steamboat Company is hosting an abbreviated VIP cruise aboard the American Countess on March 21 – 28, 2021 from New Orleans sailing northward along the Mississippi River, stopping in Nottoway and Natchez. The christening event on March 21 took place at the Mansion House at Mardi Gras World and dockside.

“Year after year, American Queen Steamboat Company has played an essential role in the U.S. river cruising renaissance benefitting the state of Louisiana from building boats in our shipyards, showcasing our iconic river cities and quaint towns to putting a spotlight on our state through its marketing efforts,” said Billy Nungesser, Lieutenant Governor of Louisiana. “It was an honor to see this Louisiana-built gem today, and I look forward to her bringing thousands of travelers through ‘The Pelican State.’”

Following the christening and preview cruise, the American Countess will begin her maiden voyage revenue cruise on March 28, 2021, sailing from Memphis to New Orleans. This journey showcases the diversity of the Lower Mississippi River on an eight-day sailing beginning with a stop at the Port of the Mississippi Delta and continuing down the river to Vicksburg, Natchez, St. Francisville, Baton Rouge and the American Queen Steamboat Company exclusive port stop at Nottoway Plantation before arriving in New Orleans. Guests will enjoy the same signature distinctions that make American Queen Steamboat Company the most celebrated river cruise line in America, from fine dining and world-class entertainment to thoughtfully planned shore excursions.

Built using the existing hull of former gaming vessel the Kanesville Queen, the American Countess was lengthened by 60-feet and underwent a total renovation in the Gulf Island Shipyard in Houma, L.A. Her sleek, contemporary design offers plenty of open space for guest gatherings, especially the portside bar, which will delight guests with an 80-foot panoramic view. With four decks, including a Sun Deck, and 123 inviting staterooms in four categories, this paddlewheeler is a home away from home on six- to 15-day itineraries.